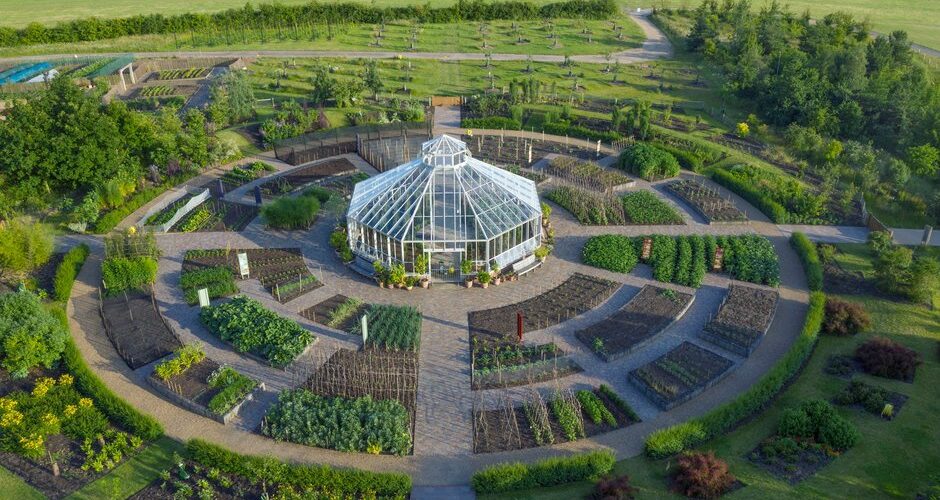 The idea of the Global Growth Vegetable Garden at RHS Hyde Hall was first conceived in 2012; when designer Xa Tollemache was inspired by the international planting of the Olympic Park as well as the increased interest in biodiverse planting and exotic vegetables.

The form of the garden is circular to reflect the global theme; divided into quarters representing the four main areas of cultivation: Europe, Asia, North America and South America. The centre is home to an octagonal glasshouse where more tender crops are grown, and round the perimeter are trees and shrubs with ornamental and edible qualities. A heritage orchard nearby features cultivars from Essex.

Designed in 2015, work commenced in on the hard landscaping in 2016 with preparation and planting in 2017. You can see see photos of the work in progress as the garden came to life here. RHS Hyde Hall is on solid clay soil, so a lot of ameliorants were added during the preparation. The beds are a mixture of raised and conventional with a formal feel that is softened by the exuberant summer vegetation.

The plants grown comprise traditional crops, ornamental plants that have an edible quality to them and less conventional plants such as Via via or Tiger Nuts (Cyperus esculenta). A mouth-watering 400 different varieties are grown in the vegetable garden. Some are comfortingly familiar favourites, such as potatoes and carrots; some are not so common such as Cucamelon (Melothria scabra) and Achoccha (Cyclanthera pedata). In the large glasshouse melons, aubergines and chillies produce a delicious display in summer.

Grow-your-own forms an important part of the future strategy of the RHS, which looks towards improving food security and our personal connection with gardens and nature. The development of the Global Growth Garden has helped to diversify the audience at Hyde Hall, and to educate and challenge the traditional concepts of edibles and edible cultivation. A focal purpose of the area is to encourage and motivate visitors, and help them discover what they can achieve in their own gardens. By using a combination of traditional and surprising plants, the audience is drawn in and tempted to try something a little less conventional for themselves. Growing ornamental plants that have an edible aspect inspires people to move past the traditional division between the two and embrace a more diverse planting (and eating!) vision for the future.

And it’s not limited to plants. The techniques and cultivation methods used by staff to nurture the crops and bring out the best flavours are a huge part of the garden, as is acting as living interpretation for visitors. Education and inspiration don’t come from just looking and reading; they come from people explaining and showing.

If you are interested in taking part in this small revolution in the way people see, grow and taste their food, there is a vacancy at the garden.